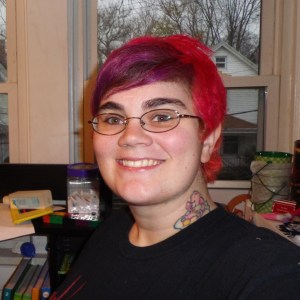 I went into the gym this afternoon for physical therapy (ankle) and was stopped by the GM of trainers.  He told me he was given a budget to film some testimonials for personal training…and that I was at the top of his list.  Go figure.  So, of course, I asked what the intended purpose of the testimonials would be…marketing (commercials and such, folks).  Me.  On television.

You might think I was immediately excited and thrilled to have such an honor, but that was not the case.  Not at all.  The first thing that popped into my head was being “that fat girl on TV” every time I went to the grocery.  Crazy.  I know.  I actually contemplated telling him I would not do it.  In fact, I was *this* close to doing exactly that.  Then…

It occurred to me just how awesome my trainer is, and how nice it would be to share that…and show some appreciation.  How could I not help them spread the word about how amazing my gym is?  How could I be so selfish, right?  More people *should* know that Fitworks is different.  Fitworks can be life changing (with some personal dedication, of course).  Most of all, though, I am going to do it for the same reason I created this blog:

Maybe, just maybe, someone else out there will think…”If she can do it, I can do it.”  Maybe I can help to inspire someone to change their life.  If that happens, it would certainly be worth it to be “that fat girl on TV” for a while.  After all, I won’t be fat for much longer…right?  🙂